Black (varies in some media)

Garry Chalk (TV series)
Willy Mackey (ウィリー・マッキー, U~irī Makkī?),[2] commonly known simply as Willy, is a major villain in the Double Dragon series, acting as the main antagonist in most versions of the first and second games (and their expanded ports), being the indisputable leader of the criminal organization known as the "Black Warriors" and often serving as the final boss.

Willy is the leader of the Black Warriors, originally a biker gang known as the "Killers"[citation needed] until it grew in members after the nuclear war and became the dominant criminal organization in New York City.

Willy is generally depicted bearing a pronounced widow's peak hairline and short, unshaven, stubble mustache and beard. He's usually seen wearing a set of matching yellow leather jacket and pants (red in the arcade and PC Engine CD versions of Double Dragon II and colored diversely in many artworks), the former featuring a spiked metal pad over his right shoulder. He's always seen armed with his trademark and trusty weapon: a machine gun that can kill the player in one shot (or at least take a huge chunk of their health).

Willy orders the kidnapping of Marian, Billy Lee's girlfriend, in order to lure him to his hideout and make him surrender the secrets to his fighting technique, since his martial arts school was opposing the Black Warriors gang. Nevertheless, Marian's kidnapping prompts Billy and his brother, Jimmy, who tags along after hearing the terrible news, to look for her whereabouts themselves. The two brothers set off to the streets and fight the gang hand-to-hand on a journey that takes them through many locations, beginning in the city slums and culminating inside the enemy's headquarters atop a hill far away in the countryside. There, they eventually defeat Willy and the remnants of the Black Warriors, and finally rescue Marian.

In the NES version of the game, Jimmy serves as the leader of the Black Warriors in Willy's place, although Willy still appears as the second-to-last opponent, just before the battle between the Lee brothers, and the manual still describes him as the "Big Boss" of the gang, which implies that Willy leads the group in some sort of figurehead capacity.

In the Master System version published by Sega, which was released a few months after the NES version, Jeff and Willy had their names switched in the English version of the manual. Willy's design is similar to his NES sprite but has his red outfit from Double Dragon II and red eyes.

In the arcade version of Double Dragon II, Willy regroups his gang and retaliates against the Lee brothers for his previous defeat by brutally murdering Marian at the start of the game, an act which once again sets the two brothers to take it to the streets in a quest to exact revenge on him and his men. Willy and his gang are once again defeated, but this time Willy is presumed to have died from injuries sustained during the battle.

Willy is not the final boss of the game, though; after his defeat, the brothers are challenged by two new opponents and the actual last bosses of the game: the Double Illusion. Their appearance after Willy may hint on him possibly being their subordinate, or perhaps even being controlled by them, implied by their evident magical nature.

Willy is the only enemy character, besides Jeff, who retains his design from the first game, only this time he wears a red version of his standard outfit.

The manual for the Sinclair ZX Spectrum English computer version of Double Dragon II expands on the story and takes some liberties not seen in other versions of the game and/or the series' established canon.

In it, it is stated that Willy indeed died at the hands of the Lee brothers five years ago, as did almost all the other members of the Black Warriors during the events of the first game, with Linda being the only survivor. Linda managed to nurse herself back to health and employed the following years in studying oriental magical arts which allowed her to bring all of her fellow gang members back from the dead, including their leader Willy.

Thirsting for revenge against the Dragons, Willy ordered his men to kidnap Marian one more time, and not willing to take any chances this time around, he immediately murdered her and placed her lifeless body inside a magical barrier inside their hideout.

The Dragons once again set on their way to Willy's headquarters to settle things once and for all, and they once again managed to defeat and kill him and all of his minions.

Being bestowed with magical powers themselves due to their Shinto birthright, and gathering enough energy from the ether after their final battle against their own tortured souls, the brothers performed a ritual with which they managed to bring Marian back to life.

Willy was eliminated from the NES version of Double Dragon II and a new character, known as the Mysterious Warrior, serves as the Lee brothers' antagonist in his place.

While based around the NES version of Double Dragon II, Willy reappears as a boss character encountered at the end of Mission 8 in the PC Engine CD version. He no longer appears to be the leader of the Shadow Warriors this time around and instead seems to be taking direct orders from the Mysterious Warrior.

Appearance-wise, Willy wears a red uniform similar to his arcade counterpart, is taller than most other enemies (around the size of Bolo and O'Hara) and has a fully grown beard.

Willy's rifle club attack is more damaging and has longer range than in prior games and he's also able to jump. There are unused animations for an unarmed Willy picking up his rifle off the wall much like the original arcade game.

While Willy does not appear in this game (nor in the NES version), his brother Jim does. He forms a new gang called the Neo Black Warriors and attacks the Lee brothers' dojo to avenge Willy's defeat at their hands. His victory is short lived, though, as he and his men are quickly dispatched by the brothers, who pursue and corner them in a nearby warehouse.

A more developed version of Willy appears in this retelling of the first game, where his reasons for kidnapping Marian are more widely explained via cutscenes, with his main goal being to get his hands on the secrets of the brothers' Sou-Setsu-Ken fighting technique. He has gray hair instead of black in this rendition and is described as one of the founders of the Black Warriors.

While he starts the fight with a machine gun, after his health is depleted, he puts away his gun and uses advanced martial arts techniques instead. Willy is an unlockable playable character in his martial artist form.

In Willy's hideout, there are statues of him, all of which are alongside a statue of a clean-shaven man with spiky hair. During the ending, an identical motorcyclist, who notably has the same shade of gray hair as Willy, watches the Lee's car as it passes by him, as the narrator says "this was the beginning of a long battle" and "what awaits our heroes". It is speculated this figure is an ally or relative of Willy Mackey.

Willy reprises his original arcade role from Double Dragon II in this 2013 remake. He makes his appearance at the end of the tutorial stage after a swarm of his minions storm inside the Lee brothers' dojo. He walks in and shoots Marian (controlled by the player) to death as she desperately tries to defend the building from the raid, thus setting off the event that will drive the brothers during the remainder of the game in their quest for revenge.

Keeping with the new aesthetics of the game, Willy looks more Asian-like and smokes a cigar this time around, although he still wears his red leather suit with metallic shoulder and calf pads from the arcade original. He's also taller and more muscular than his arcade counterpart.

In this game, it is revealed that a rival gang to the Black Warriors, The Renegades, commandeered by their "leader", Jake,[4] were the ones who actually assassinated Willy, a feat they were easily able to pull off after his defeat at the hands of the Lee brothers; this with the purpose of taking over his territory and obtain control over the entire West Coast. The remaining members of the Black Warriors were then absorbed into the ranks of The Renegades.

Double Dragon IV follows the continuity of the NES versions, rather than the original arcade games.

Roper, a character appearing in the beat 'em up crossover game Battletoads/Double Dragon, despite sharing his name with a recurring underling and being nothing more than a stage boss, is clearly intended to be Willy, the leader of the Shadow Warriors and arch-nemesis of the Lee brothers in the first two games (and their remakes). This discrepancy was likely the result of developer Rare not being very familiar with the Double Dragon storyline and characters.

The character Wild Willy in the Double Dragon animated series is loosely based on Willy from the games, but rather than being a gang leader like his game counterpart, he's simply a henchman of the Shadow Boss alongside Abobo. He's shown to be a reckless wannabe cowboy armed with two laser pistols who is eager to commit any crime just for the fun of it. Other characters, such as the Shadow Master and even Abobo, are openly irritated by him. Wild Willy only appears in the first two episodes, as he ends up being punished for his constant failures alongside Abobo by being blasted into the Shadow Mural in the beginning of the second episode.

Interestingly, his design resembles the artwork of Willy in the Zap Pax card, which had been released a year before the cartoon.

He is voiced by Garry Chalk.

Willy's artwork used in most manuals for Double Dragon. 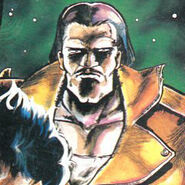 Willy from the Famicom cover artwork for Double Dragon.

Willy's artwork from the Master System manual for Double Dragon. 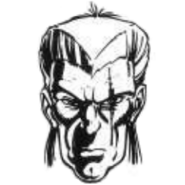 Willy's portrait from the ZX Spectrum manual for Double Dragon.

Willy from the Atari 2600 back cover artwork for Double Dragon.

Willy from the Zap Pax's card. 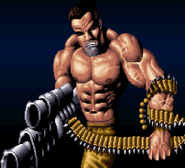 "Roper", a boss from Battletoads/Double Dragon, was clearly intended to be Willy. 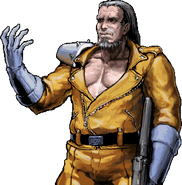 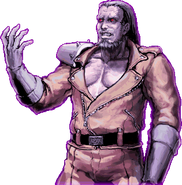 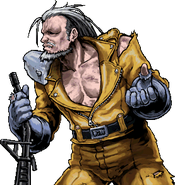