Williams is the first enemy that the player faces in the original Double Dragon. He is notably seen during the opening sequence, being the one who punches Marian in the stomach and carries her away with the rest of the Black Warriors. Throughout the course of the game, the player will face a variety of Williamses in different outfit colors and skin tones, varying with each mission. Williams's techniques include a body blow (the same one he used on Marian) and a jump kick. In addition to fighting unarmed, he sometimes carries a weapon, such as a baseball bat, a throwing knife or a dynamite stick.

In the Mode B minigame of the NES version, Williams's techniques consist of a right hook, a left body blow, a low kick, and knee kick which he performs while jumping or running. The Player 1 Williams wears blue jeans and a yellow shirt, while the Player 2 version wears white jeans and a red shirt. His name is shortened to Will on the character selection screen.

In the arcade version of Double Dragon II: The Revenge, Williams's character design has been given a wilder look. His fighting style remains relatively unchanged from the previous game, but now he approaches the player by running and frequently performing cartwheels. In addition, he also possesses the ability to throw shovels (a weapon which replaces the baseball bat in this game) and can throw knives in an angle toward the ground while jumping. The color of his outfit changes in each stage.

In the NES version, the weapons he uses are a steel pipe and throwing knives. The steel pipe functions the same way as the shovel, but unlike the arcade version, he never throws it away. He also loses the jumping knife throw move.

In the PC Engine CD remaster of the NES version, Williams has a larger moveset than his previous incarnations and attacks much more aggressively. He displays the ability to pick up heavy objects, use whips and throw hand grenades, the latter being a trait Jeff had in the arcade version of the game. In mission 7, a redheaded Williams with a yellow vest deals higher than normal damage and has an abnormal amount of health; taking 13 hyper uppercuts to bring down. Given the absence of Right Arm in this version of the game, it is possible that Williams was buffed as a replacement.

In Super Double Dragon, Williams wears green camouflage pants and a yellow vest as his default color, instead of his tank top and jeans wardrobe from the previous games. His role as the standard cannon fodder enemy remains relatively unchanged. The darker-skinned variants of Williams tend to be the ones who carry weapons in this game (with only a few exceptions). There's also a rare variant who wears light green pants that match the colors of his vest.

Williams's character design and role in Double Dragon Advance is relatively identical to the original arcade game, although he also gains a few additional abilities, such as the ability to pick up and throw heavy objects, which was previously only available to Abobo and Roper in the original. The red tank top wearing Williamses tend to carry either a nunchaku or a pair of kali sticks, although they never actually use these weapons, apparently only bringing them to the battlefield so they can be used by other combatants.

As usual, Williams is a standard lesser enemy member of the Black Warriors. His buddies Bret, Kent and Frank are reskins of him. His description in this game states that he is married to Linda.

Williams is one of the few classic villains to appear in Double Dragon Neon, alongside Linda and Abobo. The initial Williamses in Neon roughly resemble the ones from the original Double Dragon and appear alongside African-American variants who resemble actor Jim Kelly (a nod to Williams's namesake from Enter The Dragon). Throughout the game, the player will fight other texture-swapped variants of Williams in addition to the standards, such as the kung-fu uniform-wearing variants in Missions 5 and 6, lab coat-wearing variants in Missions 7 and 8, and undead versions in Mission 9. Starting from Mission 8, some Williams variants will try to shoot the player with guns they carry, being the only enemies in the game that can use firearms (not counting the Mecha Biker's blaster).

Skullmageddon, the main antagonist of the game, makes constant remarks at the expendable nature of these characters.

Williams's artwork used in most manuals for Double Dragon.

Williams's artwork from the Master System manual for Double Dragon. 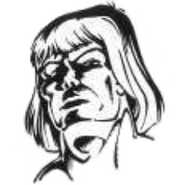 Williams's portrait from the ZX Spectrum manual for Double Dragon.

Williams's portrait from the Famicom manual for Double Dragon II.

William's portrait from the Return of Double Dragon manual.

Williams in the "Mode B" versus game in Double Dragon.
(NES)