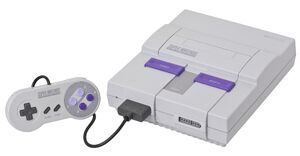 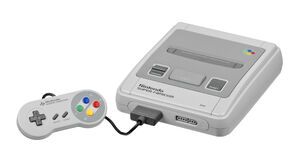 The Super Nintendo Entertainment System (SNES), also known as the Super NES or Super Nintendo, is a 16-bit home video game console developed by Nintendo that was released in 1990 in Japan and South Korea, 1991 in North America, 1992 in Europe and Australasia (Oceania), and 1993 in South America. In Japan, the system is called the Super Famicom (SFC). In South Korea, it is known as the Super Comboy and was distributed by Hyundai Electronics. The system was released in Brazil on August 30, 1993, by Playtronic. Although each version is essentially the same, several forms of regional lockout prevent the different versions from being compatible with one another.

The SNES is Nintendo's second programmable home console, following the Nintendo Entertainment System (NES). The console introduced advanced graphics and sound capabilities compared with other systems at the time. The development of a variety of enhancement chips integrated in game cartridges helped to keep it competitive in the marketplace.

The SNES was a global success, becoming the best-selling console of the 16-bit era despite its relatively late start and the intense competition it faced in North America and Europe from Sega's Genesis console. The SNES remained popular well into the 32-bit era having sold 49.1 million worldwide (comparative to the NES's 61.9 million). It continues to be popular among collectors and retro gamers, some of whom still make homebrew ROM images, in addition to its popularity in Nintendo's emulated rereleases, such as in Virtual Console environment.