The Black Warriors (ブラック・ウォリアーズ, Burakku U~oriāzu?), also known as the Black Shadow Warriors or simply the Shadow Warriors, is an evil organization in the Double Dragon series, serving as the main adversaries to the Lee brothers in most of the installments that conform the franchise.

The Black Warriors was originally a biker gang known as the "Killers",[citation needed] until it grew in members after the nuclear war and became the dominant criminal organization of New York City. Its founder and leader was a gang lord named Willy Mackey. The group mainly conducted their operations in the form of a huge gang that ruled the city streets.

At some point, Willy came into knowledge of a pair of twin brothers living in the outskirts of the city who practiced a secret form of martial arts known as Sou-Setsu-Ken; their names were Billy and Jimmy Lee. They taught this technique to their students at their dojo to help them survive in the hostile environment that had become prevalent on the streets with the rise in power of all the gangs.[1]

Wanting to get his hands on this knowledge for himself, Willy schemed the kidnapping of Billy's girlfriend, Marian, leaving him a note saying that if he wanted to see her again, he had to bring the scrolls (or book in some versions) containing the secrets of the Sou-Setsu Arts to him.[2] Instead of blindly complying to his demands, the two brothers tagged along and embarked on a journey to free Marian by themselves by taking it to the streets, facing any opponents that stood in their way. After a long and arduous journey they finally arrived to Willy's hideout, where they defeated him and the remnants of his gang, and rescued Marian from their clutches.

Willy survived the attack, though, and full of resentment against the brothers for this defeat, reorganized the Black Warriors with even more powerful members (some of which who even practiced magical arts).

One day, Willy and some of his henchmen ambushed Marian on the streets and brutally shot her to death at plain daylight. The brothers, thirsting for revenge, once again went to his hideout and defeated him a second time, leaving him for dead.[3]

Time later, while the brothers were away, a gang attacked one of their dojos, presumably fatally wounding one of their best students.[4] This new group was called the "Neo Black Warriors" and their leader was none other than Jim Mackey, Willy's younger brother, who wanted to avenge his supposed death at their hands.[3] His victory was short-lived, though, as the brothers were quick in dispatching both him and his new gang.

The story about the Black Warriors' creation, activities and ultimate demise has been retold numerous times along the many remakes and ports some of the games have had (mainly the first and second installments), with new elements, variations, events and characters involved having been added to its lore; some of which that have even added fantastic elements to it, such as is the case of titles like Battletoads/Double Dragon, the animated series and the live-action film.

As the series progressed, the name "Shadow Warriors" slowly became the predominant term to refer to this evil organization, mainly in western product releases and especially in the animated series, where it sprouted a multitude of terms with the prefix "Shadow" on them (examples include: Shadow Master, Shadow Boss, Shadow Khan, Shadow Dojo, just to name a few). Apparently, at some point the term also even influenced original Japanese developed products (e.g.: the trailer in Mission 4 and the carpet in the final room in Mission 7 in Return of Double Dragon bear insignias with the letters "SW" on them).

The influence of the name has even made an impact on some of the games' gameplay mechanics, to the point of the concept of using shadows having been frequently implemented in a literal sense in some of the enemies' fighting techniques. Some examples include:

Known as the "Neo Black Warriors" in this game.

The name of Skullmageddon's gang is never given in the game, although a press release by Majesco identifies them as the "Black Dragon Clan". 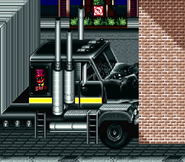 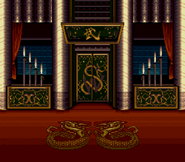 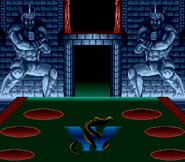 Retrieved from "https://doubledragon.fandom.com/wiki/Shadow_Warriors?oldid=15442"
Community content is available under CC-BY-SA unless otherwise noted.