Edit
watch 01:36
We're Getting Mutants in the MCU - The Loop
Do you like this video?
Play Sound

For the final boss in certain versions of Double Dragon II, see Mysterious Warrior.
Not to be confused with Shadow Boss.

Centuries ago (DD V only)

Jim Byrnes
The Shadow Master is the main antagonist in the Double Dragon animated series. He also appears as the final opponent (and secret playable character) in the one-on-one fighting game Double Dragon V: The Shadow Falls.

His ultimate goal is to cover the world in shadows and darkness. He has a vast array of powers, which include shapeshifting and teleporting, and is the owner of the dreaded Shadow Mural, a magical wall where he can eternally entrap enemies or punish those warriors who have failed him. He is evil and cruel, and possesses a polearm with a detachable lower half that becomes a sword to be used by the Shadow Boss, his second-in-command.

He is the half-brother of Billy and Jimmy's mother, Marika Lee, making him the siblings' uncle, although he willingly shed his former identity behind after he was consumed by the Black Flame.

He was voiced by Jim Byrnes.

The man known only as the "Shadow Master" was once a disciple of the Oldest Dragon at the Dragon Dojo with his half-sister, Marika. Even back then, Marika's brother was a cruel and power-hungry man. He only trained at the dojo to learn powerful martial arts, disrespecting the dojo's beliefs and philosophy. Desiring the position of "Dragon Master" for the power and prestige that came with it, his rival for the position was John Lee, Marika's husband. Even though both men were nearly equal in might, in the end, John Lee won the position of Dragon Master as the Oldest Dragon sensed the evil within Marika's brother.

Due to this, as well as his sister marrying his rival, he decided to seek power elsewhere and exact his revenge by assembling the Shadow Warriors and reviving the evil force known as the Black Flame. With the Black Flame's power, he was transformed into the "Shadow Master" persona, forgoing his humanity with this. With his new powers and army, the Shadow Master began terrorizing the city, although John ultimately thwarted his plans.

When Marika gave birth to twins bearing the mark of the "Double Dragon", the Shadow Master decided to dispose of the infants, fearing they would fulfill a prophecy that foretold his ultimate demise at their hands. He kidnapped Marika and one of the babies, while John saved the other. However, instead of killing the infant, he made an agreement with Marika, allowing the child to live if she willingly entered the Abyss inside of his Shadow Dojo.

The Shadow Master raised the child, called Jimmy, as his own son, teaching him the dark arts and making him his second-in-command: the "Shadow Boss". At the same time, the other brother, Billy, was dropped off by John at the Dragon Dojo, where the Oldest Dragon raised him to become the next "Dragon Master".

Around this time, the Shadow Master attempted to track down John and found him staying with a middle class couple living with their juvenile age son. The Shadow Master and his Shadow Warriors raided the house and burned it down, killing the couple and forcing the boy to flee, although it isn't known if John escaped. The now orphaned and homeless boy eventually grew up to become Vortex.

The two brothers eventually became aware of each other and the Shadow Master ordered Jimmy to kidnap his brother. However, he ended up turning against Jimmy and ordered his goons to kill both twins, after which Jimmy turned to the side of good and sided with his brother, becoming the "Double Dragons".

The Shadow Master is well versed in the dark arts, drawing all of his powers from the Black Flame. He wields a unique half-sword-half-polearm weapon, which he can detach to wield each half separately. He can shoot blasts of dark energy and teleport, as well as walk through shadows at will.

He is shown as a cunning, ruthless and cold-hearted villain who has no issue betraying anyone or breaking his word. The Shadow Master seeks power at all costs, punishing all those who fail him by imprisoning them in his Shadow Mural. He is not arrogant, however, as he knows better than to challenge beings more powerful than him (such as Shadow Khan).

In the video game, the Shadow Master is described in his bio as a centuries old being born from nightmares. This information doesn't appear to correlate with the TV series, where the Shadow Master grew up with Marika as a normal (although evil) human being. 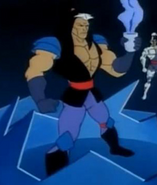 The Shadow Master without his mask in the Double Dragon animated series.