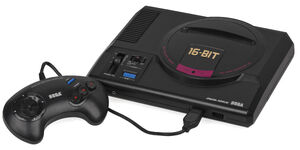 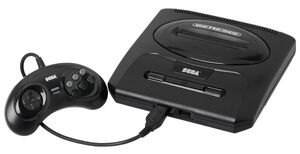 Designed by an R&D team supervised by Hideki Sato and Masami Ishikawa, the hardware was adapted from Sega's System 16 arcade board, centered on a Motorola 68000 processor as the CPU, a Zilog Z80 as a sound controller, and a video system supporting hardware sprites, tiles, and scrolling. The system plays a library of more than 900 games created by Sega and a wide array of third-party publishers and delivered on ROM-based cartridges. The Genesis has benefited from several add-ons, including a Power Base Converter to play Master System games, as well as multiple first and third party licensed variations of the console. Sega created two network services to support the Genesis: Sega Meganet and Sega Channel.

In Japan, the Mega Drive did not fare well against its two main competitors, Nintendo's Super Famicom and NEC's PC Engine, but it achieved considerable success in North America, Brazil and Europe. Contributing to its success were its library of arcade game ports, the popularity of Sega's Sonic the Hedgehog series, several popular sports franchises, and aggressive youth marketing that positioned the system as the cool console for adolescents. The release of the Super Nintendo Entertainment System two years after the Genesis resulted in a fierce battle for market share in the United States and Europe that has often been termed as a "console war" by journalists and historians. As this contest drew increasing attention to the video game industry among the general public, the Genesis and several of its highest-profile games attracted significant legal scrutiny on matters involving reverse engineering and video game violence. Controversy surrounding violent games such as Night Trap and Mortal Kombat led Sega to create the Videogame Rating Council, a predecessor to the Entertainment Software Rating Board.