Roper (ローパー, Rōpā?), also known as Rowper or Lopar in some translations, is a recurring minor enemy in the Double Dragon series, often appearing alongside Williams.

In the arcade version of the original Double Dragon, Roper is the second most recurring minor enemy in the game, after Williams. He has short black hair and wears a shirtless vest with matching colored pants and spiked shoulder pads. Like Williams, Roper appears in a variety of different outfit colors and skin tones, which change with each stage. His fighting style is not much different from Williams's, the main difference being that Roper can not only wield all the same weapons that Williams uses (baseball bat, throwing knife and dynamite stick), but he can also lift and throw heavy objects at the player, such as oil drums, packaging boxes and boulders.

Roper exclusively wields heavy objects in the NES and Game Boy ports, which only appear when he's around. However, in the Mode B minigame in the NES version, he can also wield a tonfa when two players are competing. His techniques primarily consist on jabs and a back spin kick. Player 1 controls the Roper in the blue outfit, while Player 2 controls the one in the green outfit.

In the Master System port, Roper retains the ability to use bats, knives and dynamites, but can no longer lift heavy objects like he does in the other versions.

In the Sega Genesis port, all of Roper's palettes have dark skin; this is in contrast to Williams, who only has light-skinned color palettes.

In the arcade version of Double Dragon II: The Revenge, Roper wears the same outfit from the first game, although now he fashions a scruffy beard and wears an eye patch, giving him the appearance of a pirate. His only new techniques in this game are a back kick and the shovel throw.

In the NES version, Roper more closely resembles his self from the first game, lacking the beard and eye patch from the arcade version. He no longer throws heavy objects, but instead wields incendiary bombs and boomerangs.[1] The boomerang is an exclusive weapon that cannot be taken away from him by the player.

In Super Double Dragon, Roper is a head-swap of his partner Williams. He wears a bandanna featuring a Japanese flag, along with a shirtless white vest and pants. His fighting style is almost identical to Williams's, aside from the addition of a slide kick. The darker skin variants of Roper tend to carry weapons. Mission 5 introduces variants in light green clothing who tend to carry oil drums and large rocks. There's also a rare variant who wears a yellow vest and purple camouflage pants (matching Williams's standard colors) who appears in Mission 3.

Lopar is a shirtless bandanna-wearing thug who confronts the player throughout Level 5, Missile Mayhem, which is set atop a giant missile traveling through outer space that is making its way toward Earth. His techniques include flying jump kicks, cartwheels and shuriken throws.

Lopar's name comes from an alternate translation of the name "Roper" that appeared in the manuals for certain versions of the original Double Dragon - a result of the ambiguity that comes from transliterating foreign names or words rendered in Japanese. Despite this, Lopar appears to be more closely modeled after the Double Dragon II arcade incarnation of Williams, who also had a cartwheel move and threw knives. His bandana appears to be based off the Super Double Dragon incarnation of Roper.

Oddly enough, the boss of Level 3, appropriately called Ropes 'N' Roper, is also called "Roper", although he is clearly intended to be Willy Mackey, the leader of the Black Warriors and arch-nemesis of the Lee brothers in the first two games (and their remakes), wearing yellow garments and carrying his trademark machine gun. This discrepancy was likely the result of developer Rare not being very familiar with the Double Dragon storyline and characters.

Roper's design in Double Dragon Advance is relatively unchanged from his counterpart in the original arcade game, aside from gaining the ability to throw infinite knives and grenades. Like many home versions, his default skin tone is dark as opposed to Williams's default palette being light-skinned.

After the Lee brothers fight to the top of the Okada Tower in Japan, Shannon Okada escapes in a helicopter and the brothers beat information out of Rowper. He tells them to go to Rinka Kabukicho.

Roper artwork used in most manuals for Double Dragon.

Roper artwork from the Master System manual for Double Dragon. 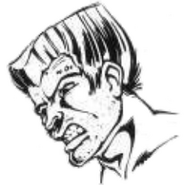 Roper portrait from the ZX Spectrum manual for Double Dragon.

Roper's portrait from the Famicom manual for Double Dragon II.

Roper's portrait from the Return of Double Dragon manual.

Roper in the "Mode B" versus game in Double Dragon.
(NES)