Right Arm (右腕, Migiude?) is an enemy in the Double Dragon series. He is a high-class martial artist who relies only in hand-to-hand combat to deal with his opponents.

Right Arm is a "middle boss" class enemy who appears at least once in every stage from Mission 2 through Mission 8 in the NES port of Double Dragon II: The Revenge, usually in pairs or in groups of three or four. They always fight unarmed, although their punches and kicks are quicker and stronger than those of other lower-class enemy types (especially their jump kicks).

While Right Arm is exclusive to the NES port of Double Dragon II, he can probably be considered to be a replacement of Jeff from the arcade versions of the first two games, since the latter was cut in this version of Double Dragon II. However, unlike Jeff, who is a head-swap of the Lee brothers, Right Arm has his own design.

Right Arm was supposed to appear in the PC Engine port of Double Dragon II, but was cut from the final game, with his appearances being given to Williams and Roper instead. Nonetheless, his full graphical assets are still present in the game's data. One of his animations appears to be him throwing an object, suggesting that he was intended to throw grenades just as Williams did in the final game and as Jeff did in the original arcade game.

Right Arm later reappeared in Double Dragon IV as an enemy character who can be unlocked once the game is completed. 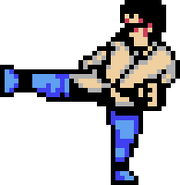