The red car is an iconic vehicle introduced in the arcade version of Double Dragon that can be seen at the start of the game after the Lee brothers emerge from their garage to pursue the Black Warriors.

The car, which appears to be based on a Firebird Trans Am, is actually the same vehicle driven by the protagonist in the 1985 LaserDisc-based arcade game Road Blaster by Data East (also known as Road Avenger and Road Prosecutor in some versions, presumably to avoid confusion with the similarly titled Atari arcade game RoadBlasters). Road Blaster was an earlier game developed by Double Dragon designer Yoshihisa Kishimoto before he was employed by Technōs Japan.

The car is seen again in the ending of the mobile version of Double Dragon, driven by the Lee brothers and Marian as the credits roll.

The vehicle also prominently appears in the introductory cutscenes of Double Dragon IV. 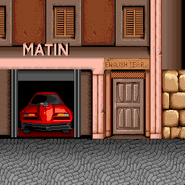 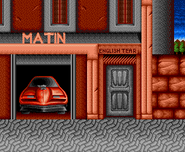 Rage of the Dragons

The three friends, reunited at last, hanging out in Billy's car in the ending of the mobile Double Dragon remake.

Steam trading card of the red car, as seen in Double Dragon Trilogy.