Marian Kelly (マリアン・ケリー, Marian Kerī?), often just referred to simply as Marian, and sometimes known as Marion, is a fictional supporting character in the Double Dragon series. She is Billy Lee's girlfriend; a part-time martial arts instructor at their dojo who is usually kidnapped and held hostage (mainly by the Black Warriors criminal gang), setting off the events of several games in the franchise.

Marian Kelly is Billy Lee's lovely girlfriend. Billy is a young martial arts instructor who, along with his twin brother Jimmy, has a small dojo at the outskirts of the city; both brothers are masters of a secret millennial Chinese fighting technique known as the Sou-Setsu-Ken. Willy Mackey, a gang lord leader of the current dominant criminal syndicate in New York City, the "Black Warriors", wanting this knowledge for himself orders Marian's kidnapping in order to lure Billy into revealing the secrets of the Setsu Arts to him. One day, he and his henchmen ambush Marian outside the Matin garage and Williams, one of Mackey's goons, knocks her out and they take her to their hideout.

Billy and Jimmy soon arrive at the scene of the crime and decide to take off on their pursuit. After fighting numerous Black Warriors' minions and visiting several locations while on her search, they finally arrive and break into Willy's headquarters, where they defeat both him and his men. However, before setting Marian free, the two brothers engage in a fierce battle between themselves to decide who would be the one taking her home.

During the course of the series, it is heavily implied that Jimmy was involved with Marian prior to her relationship with Billy, an event that made an uneasy rivalry to grow between both brothers (which is also hinted by the final confrontation between them for Marian's affections at the end of the first game); although apparently they would always be ready to temporarily put their differences aside should the occasion demand it (such as was the case of Marian's kidnapping). This theory is further supported in Double Dragon II: Wander of the Dragons, where a tree with an old heart-shaped carving with Marian's and Billy's name can be found during the boss battle with Jeff, and which also has Jimmy's name scrapped on the side.

Surviving his prior defeat at the hands of the Lee brothers, Willy Mackey, the leader of the Black Warriors, devised a plan to get back at them by targeting the one thing they cared the most: their friend Marian. Reorganizing his gang with even more powerful members, he once again ambushed Marian on the city streets at plain daylight, although this time he brutally shot her to death with his machine gun.

The brothers, drunk with rage, once again went on his pursuit and defeated both him and the remnants of the Black Warriors, leaving Mackey for dead. After the battle, an old photograph of Billy, Jimmy and Marian hanging out together is shown, with her crying a tear symbolizing the good old times that will never come back.

This outcome was retconned in the NES/PC Engine versions of Double Dragon II, where if the game is completed on the hardest difficulty by beating the Mysterious Warrior at the end, before dying he leaves the brothers with the "Legend of the Shadow":

"If the illusion spreads the evil will live again.
But if two dragons soar through the sky,
an angel will fall to the Earth."

Following the prophecy, that night Marian miraculously comes back to life and she returns to the Double Dragons alive and well.

As you know by now, Marian (or Marion, which is Acclaim's preferred spelling) is Billy's girlfriend, who was held prisoner by the Black Warriors during the first game and was literally saved from death at the end of the second. In the American version of Double Dragon III for the NES, she once again serves the role of damsel-in-distress, where she's held hostage by a mysterious group demanding the Rosetta Stones in exchange for her safe return. As the story unfolds, it is eventually revealed that she has been possessed by an evil Egyptian spirit that turned her into the not-so-cleverly named Princess Noiram, and she actually acts as the main antagonist and final boss in that version of the game.

However, that's not the case at all in the original arcade and Japanese versions, where Marian is safe and sound for once, and even gives instructions on how to play through the game's manual. In both the arcade and Famicom versions of the game, the main antagonist is instead Cleopatra.

Marian's involvement in the story is only barely told through the game's manual, but neither does she appear nor is she ever mentioned in the game itself. In the Japanese manual, however, the story is covered in a bit more detail and artworks of her appear all through its pages.

Marian is the newest member of the "Metro Task Force". She met Billy while trying to stop an armored car heist being carried out by Wild Willy and Abobo. She then followed him back to the Dragon Dojo and offered to make him a special deputy with the police department, allowing him to arrest people and carry a weapon (even though he was already doing this anyway). When Jimmy subsequently turned to the side of good, Marian deputized him as well.

Unlike in the video games, here Marian does not act as Billy's girlfriend. She's not even a potential love interest for either of the brothers, and in fact, she manages to butt heads with Jimmy multiple times. Nonetheless, she's always eager to work together with the Dragons to stop the Shadow Master and fight crime, and she'll stand by their side even when public sentiment has turned against them. Marian is shown to be skilled in combat, even though she's not a member of the Dragon Dojo. She was featured quite prominently in Season One, but her role in the show was downplayed during Season Two.

She is voiced by Cathy Weseluck.

In the film, Marian Delario is the leader of a gang of vigilantes known as the "Power Corps", conformed mainly by teenagers seeking justice in response to the hostile environment that reigns on the streets with the rise of all the gangs. Marian, on her part, is actually the rebellious daughter of the city's chief of police.

She is portrayed by Alyssa Milano.

A cheerful, justice-loving, and very athletic young woman. She likes salad and cats. She seems like a typical girl, but she is actually the female leader of a street gang. Because of this, her strong personality and courageousness stand out, but she also has a kind and feminine side. While currently learning martial arts from the Lee brothers, she had also studied figure skating, so she fights with a tricky technique that utilizes those skills. She thinks of Billy and Jimmy as younger brothers who always need for help.

Marian is Billy's girlfriend, who was kidnapped by the Shadow Warriors so that the Dragons would hand over the book of the Sou-Setsu-Ken. The affection that both Billy and Jimmy hold for her seems to be creating tension between the brothers lately.

Marian adopts a more Oriental-like look in this game, being an instructor at the Sou-Setsu-Ken Dojo. She once again becomes a playable character and is controlled by the player all throughout the tutorial, where they are taught the basics of the game and the use of special attacks (and with it, unknowingly assuring them to get the bad ending, as the player is not allowed to use any special moves during the whole game in order to get the good ending, even in the tutorial).

After going through a few lessons dealing with Black Warriors storming inside the dojo, Willy finally walks in and brutally shoots her to death with his machine gun (following the premise of the original game), setting off the event that will drive the Lee brothers in their quest for revenge for the remainder of the game.

She is also one of the four available characters in versus mode (the others being Billy, Jimmy and Jeff).

In this game, Marian is kidnapped by the Okada sisters and taken to Japan as a way of bringing Billy and Jimmy there for the sisters to take down. After the brothers are dropped down a trap door, they find her while escaping the area under the sister's villa. She tells them where the sisters went and they go off for one final fight against them.

Rage of the Dragons

This game uses the characters and settings from Double Dragon, but is deemed non-canon since Evoga, the developers of the game, couldn't get the rights of the franchise.

Renamed Mariah in this game, not much is said about her, although the plot changes her involvement with Jimmy, announcing how they were in a relationship instead of her being with Billy. She is also long dead in this version, as shown in Jimmy's ending, in which he visits her grave with his new female partner Sonia. Jimmy is shown to not have completely gotten over Mariah's death, as seen in his ending with Billy as his partner. Billy asks him to let it go and move on with his life, but Jimmy angrily refuses.

Marian in a cutscene from Double Dragon II: The Revenge
(NES)

Marian in a cutscene from Double Dragon II: The Revenge
(NES)

Marian as depicted in the Famicom manual for Double Dragon III 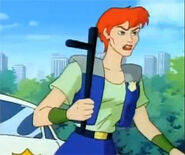 An old photograph of Billy, Marian and Jimmy

The Black Warriors kidnap Marian to lure Billy into their hideout

Marian being rescued by Billy

Marian being rescued by Jimmy

The three friends reunited at last

River City Girls
Add a photo to this gallery

Retrieved from "https://doubledragon.fandom.com/wiki/Marian?oldid=14285"
Community content is available under CC-BY-SA unless otherwise noted.