Jessie Seely (Neon)
Linda Lash (リンダ, Rinda?) is a fictional character from the Double Dragon beat 'em up video game series. She is an iconic female member of the Black Warriors street gang. Her trademark weapon is the whip.

A female thug and the sole female member of the Black Warriors. Her weapon of choice is the whip. If the player manages to attack and disarm her, she can still be dangerous, as she can still fight without her weapon by using strong punches capable of knocking the enemy down. If not careful, she can punch the player and manage to retrieve her whip while they're stunned.

Linda is back in the second installment of the series, this time boasting a whole new punk redesign which contrasts with her previous (and more feminine) look from the first game. She can now jump (which allows her to escape from conveyor belts) and has a tricky elbow smash. Her main weapon is a flail, although she can also throw knives and hand grenades, which makes her a deadly opponent, especially when supporting other enemies.

Linda's backstory was greatly expanded in the manual for the Sinclair ZX Spectrum English computer. However, it must be noted that these events may only be considered for that specific release of the game or take part in their own continuity, and not form part of the series' main established canon.

The manual states that all the members of the Black Warriors, including Willy, were indeed killed by the Lee brothers during the events of the first game five years ago, with Linda being the only survivor. After that first struggle, Linda managed to nurse herself back to health and spent several years studying ancient oriental arts of healing, or Undhai. During her studies, she also learned powerful magical arts which allowed her to reincarnate and bring back from the dead all of her Black Warriors comrades.

To perfect her new magical skills, she started by resurrecting the lesser minions of the Black Warriors until she had gained enough mastery to concentrate all of her power to raise Willy himself. Some of her first attempts didn't go as well, though, and Linda's early experiments produced a few mutated gang members.

The now resurrected Willy, urging for revenge against the Lee brothers, ordered his minions to kidnap Marian once again, and not willing to take any chances this time around, he immediately murdered her and placed her remains under a magic field conjured by Linda (who had achieved a rapid promotion within the hierarchy of the Black Warriors as a result of her success in getting Willy up and about).

The Dragon twins once again set on their way to defeat Willy and his gang, and retrieve Marian's body from their hands. After killing Willy a second time, and having native magical powers of their own bestowed due to their Shinto birthright, they were able to break into the magical barrier guarding Marian's remains.

At that point, however, their very own tortured souls materialized and attacked them, although the twins ultimately prevailed over them as well. This final struggle actually allowed them to draw sufficient power from the ether to enact a Shinto resurrection ceremony and bring Marian back to life.[2]

Linda appears as a recurring enemy type in Level 3, Ropes 'N' Roper. Linda in this game is permanently armed with a whip, meaning that the player cannot disarm her and arm himself with her weapon. Noteworthy is that she's given the full name "Linda Lash" in the manual, which was also used in the later live-action film.

Linda is Koga Shuko's main lieutenant and personal bodyguard, and is in direct command of his two most fearsome minions: Huey and Lewis. Her full name is Linda Lash, although she's often called "Lash" for short.

Some time ago, she commanded a raid on a secluded Chinese monk village in search of the fabled Double Dragon medallion. The mission was a success, although only partially, as only one half of the medallion was found.

She keeps acting as a support minion of Shuko (although a still prominent one, nonetheless) throughout the rest of the film in his search of the other half of the medallion. She ends up developing a personal rivalry against Marian Delario, leader of the "Power Corps", which they settle in a final one-on-one fight, where Linda ultimately (and embarrassingly) ends up being tied to a pole with her own whip.

A female member of the Shadow Warriors who specializes in whip attacks, although she sometimes carries knives too. Even though she's the weakest member of the gang, Linda is not to be underestimated, especially when she has her whip or knives.

Since Double Dragon Advance is merely an expansion/retelling of the arcade version of Double Dragon, Linda both looks and behaves pretty much the same as in the original game, although she has now been given a few new moves (such as a high kick) and she can appear in a wide assortment of palette-swap variants. In addition, she sometimes comes armed with a spiked flail instead of a whip (although both behave practically the same).

Oddly enough, in this mobile remake of the first game, Linda's sprite looks very muscular and male-like, and her clothes, which are a variant of her classic purple catsuit, appear to have been modified to fit that of a male gym instructor. According to her description in this game, she is Williams's wife.

The "Sadistic Seductress" Linda is a common enemy that attacks either with her whip or grenades. Her kicks have good reach, are fairly strong, and can knock players out of the air easily. Her attacks include a back spin kick which she often performs before the player actually reaches her, anticipating their moves, or a rising kick which she usually performs when being attacked from above. When fighting Linda, it's best to stay on the ground, dodge one of her attacks and counterattack while gleaming.

Special care must be taken when she comes armed with her whip, as it has a very long reach (almost half the size of the screen) and she'll attack with it from afar, with a motion that will cover both her frontal and rearguard, in addition to potentially hitting fallen opponents a second time that had been knocked down by the first hit.

In this game, Linda fashions a short jacket, miniskirt and long boots all clad over sexy lingerie, although still retaining a similar design to her Double Dragon Neon's incarnation, with the policewoman cap and apocryphal police badges. Her iconic whip is nowhere to be found, though, and she's instead often seen wielding other types of generic weapons, such as 2×4s.

Linda, like many other Double Dragon characters, makes a cameo appearance in River City Girls. As usual, she fights using her trademark whip. When called by the player for assistance, she whips the ground and launches upward any enemies hit.

Linda artwork used in most manuals of Double Dragon.

Linda artwork from the Master System manual of Double Dragon. 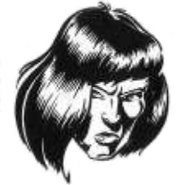 Linda portrait from the ZX Spectrum manual of Double Dragon.

Linda portrait from the Famicom manual of Double Dragon II. 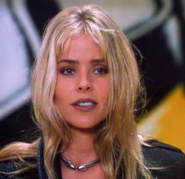 Concept art of Linda for Double Dragon II: Wander of the Dragons.

Linda in the "Mode B" versus game in Double Dragon.
(NES)