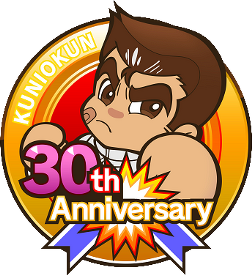 The Kunio-kun (くにおくん?) series is a video game series started by Technōs Japan mainly conformed of beat 'em up games and featuring more than 30 titles to date. The series is now handled by Arc System Works, who purchased all of the intellectual property rights from Technōs' spiritual successor, Million Corp. The first game in the series is fully titled Nekketsu Kōha Kunio-kun (熱血硬派くにおくん?) (released as Renegade in North America), which roughly translates to "Hot Blood Tough Guy Kunio", with "Nekketsu" being the name of Kunio's high school. The kun suffix after his name is an informal Japanese honorific usually applied to young males.

The series originated in the arcades and the Famicom console; its title and its protagonist, Kunio (variously renamed "Alex" and "Crash Cooney" in the United States), were named after Technōs Japan's former president, Kunio Taki. Along with that, Kunio also later became Technōs Japan's main mascot, appearing on the company's logo in several games and television commercials. Although the original game was created by Yoshihisa Kishimoto (who later designed Double Dragon), many of the later games (particularly those under the Downtown Nekketsu moniker) were the handiwork of two men: Mitsuhiro "Yoshimitsu" Yoshida and Hiroyuki "Mokeke" Sekimoto.

A few of the early Kunio games for the NES were localized for the North American market. These include Renegade, River City Ransom, Super Dodge Ball, Crash 'n' the Boys: Street Challenge and Nintendo World Cup, which were heavily "Americanized" versions of the Kunio-kun games. Technōs Japan has released over twenty Kunio-kun titles for the Famicom, Game Boy and Super Famicom in Japan. In addition, licensed ports of the games were made for other platforms such as the PC-Engine (through Naxat Soft), Mega Drive (through Pal Soft) and the Sharp X68000 (through Sharp).