Brown (bleached white or natural white hair in the film)

Red (green in the film)

He also appears as the final opponent in the one-on-one fighting game Double Dragon, originally released on the Neo Geo, which is loosely based on the movie.

Koga Shuko is the dictator of evildoers that run all over Bloody Town. He is a wealthy businessman and former crime lord seeking to possess both halves of the fabled "Double Dragon" medallion, a mystical amulet said to grant great power to those who possess it. He is a martial arts master with invincible strength who seeks to have complete control over all the street gangs of New Angeles.

Years ago, then crime lord Victor Guisman ordered a raid to a village located in a remote region of China in search of the fabled "Double Dragon" medallion. His henchmen succeeded in obtaining one half of the amulet, leaving Guisman with the pending matter of finding the other one so he could one day achieve ultimate power.

Now in present times and going under the alias of "Koga Shuko", Guisman has risen to power as a wealthy executive, having great influence in the post-apocalyptic city of New Angeles. He commands most of the street gangs in the city and seeks to consolidate his power by gaining total control over them.

One of his henchmen (Bo Abobo) manages to learn the whereabouts of the other half of the medallion, which happens to be in possession of Billy Lee, a teenage martial arts practitioner along with his older brother Jimmy.

With this information, Shuko, accompanied by a group of his best men, arrives at the abandoned theater where the Lee brothers live under the care of Satori Imada. A fight ensues between the two groups and Satori ends up sacrificing herself in order to allow her two protégés to escape (the theater explodes with her inside due to Shuko's doings).

In his obsession to obtain the other half of the medallion, Shuko orders all of the street gangs of the city to find the Lee brothers. After various pursuits, fights and miraculous escapes, Shuko ultimately manages to get possession of their other half. The brothers confront him in a final showdown in his own office building. Reuniting the two halves of the amulet, he transforms into two mystical "shadow warriors" who battle the Lee brothers. However, each manages to retrieve one half of the amulet, get the upper hand with their new acquired powers and finally defeat Shuko. The police arrives shortly afterward and he is arrested and taken away.

Shuko becomes a playable character by the use of a special code. 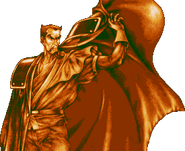