Jimmy Lee (ジミー・リー, Jimī Rī?), originally known in the West by the localized nickname of "Spike",[1] is one of the two main protagonists of Technōs' Double Dragon series of beat 'em up games. He is the twin brother, training partner and in some occasions even rival of Billy Lee. He is a master of Sou-Setsu-Ken, a legendary Chinese martial art which he mastered at a young age.

Despite their differences, he is always ready to tag along with his brother whenever trouble arises; more so if it involves a good fight. In more than one occasion he has fought Billy for the affections of their mutual friend, Marian.

While Jimmy is traditionally portrayed as a protagonist for most of the series, fighting evil alongside his twin brother, he has also been portrayed as an antagonist in a few notable works.

One of the Lee brothers, who is also a Sou-Setsu-Ken master. He is out to crush the Black Warriors with his twin brother, Billy. However, he may have his own hidden agenda as well.

In the NES version, Jimmy is secretly the Shadow Boss,[2] leader of the Black Warriors. Whereas the original arcade version had both Lee brothers working together to fight against the Black Warriors in order to rescue their female friend Marian, in the NES version Billy fights completely alone and Jimmy only shows up to confront him at the end, after Willy (the leader of the gang in the arcade version) is defeated by the player.

Presumably, this change in the story was done due to developer Technōs Japan's inexperience with the NES hardware at the time, making it difficult for them to work around the console's limitations and properly implement a two-player cooperative mode in the game's conversion. The game's title having the adverb "double" in it wouldn't have made much sense with just one of the Lee brothers in the game, so they made the other one into a bad guy. While the arcade version did feature a fight between both brothers at the end, it was an optional battle that only occurred if both players defeated Willy together, and was simply a contest over who would win Marian's affections. The game's sequels on the same platform, Double Dragon II and III, both included their own two-player co-op modes, thus having both Lee brothers as heroes again. Jimmy's change of status from an antagonist to a protagonist in the NES versions of the sequels was left unexplained.

Billy's twin brother. Like him, Jimmy is also a legendary master of Sou-Setsu-Ken. Although he helped his brother crush the Black Warriors during the first game, he also had feelings for Marian and that developed a rivalry between the two brothers. He now joins Billy in a quest to avenge the woman they both loved. Jimmy is Player 2 and wears white clothing in the original arcade version and direct ports of the game. In the NES port, he wears red.

Billy's older brother taken by the Shadow Warriors before Billy was born.[citation needed] He and Billy were responsible for the downfall of the original Black Warriors gang a few years ago and the defeat of their leader, Willy. Since then, they went on a training mission to complete their Sou-Setsu-Ken, and two years later they are now on a worldwide hunt for the Rosetta Stones.

The other half of the Double Dragons. He opened the Sou-Setsu-Ken Dojo in Los Angeles with his younger brother. He uses the northern-style of Sou-Setsu-Ken, which focuses on powerful techniques.

In the Game Gear version of Double Dragon, Jimmy is said to have been killed by a gang called the "Dragon Lords". However, it is eventually revealed that he's still alive, although under mind control, and acts as the final boss of the game, known as the "Black Samurai".

Billy's twin brother, who is also a Sou-Setsu-Ken master.

Jimmy (voiced by Scott McNeil) is Billy's twin brother. Although his face is similar to John's, he has blond hair like his mother Marika.

The animated series loosely adapts the plot of the NES version for its first two episodes, having Jimmy as the show's initial antagonist. Prior to the events of the first episode, the Lee brothers were separated at birth after Jimmy was kidnapped from the hospital by his half-uncle, the Shadow Master, along with his mother. In order to save Jimmy's life, Marika agreed to enter the Abyss inside the Shadow Dojo. The Shadow Master then raised Jimmy as his own son and trained him in the way of the Black Flame, while Billy was raised by their father's sensei, the Oldest Dragon.

When the twins reached the age of 18, Billy inherited the title of "Dragon Master", becoming wielder of the legendary Dragon Sword, while Jimmy was already active as the Shadow Boss, the Shadow Master's second-in-command and wielder of the Shadow Sword. Jimmy became aware of his twin brother when the latter began foiling his criminal goals. Likewise, Billy eventually learned the truth about Jimmy and tried to convince him to change his ways. When the Shadow Master betrayed Jimmy by ordering his assassination due to his failure to recover the Dragon Sword, and after Billy saved him, he abandoned his evil ways and joined forces with Billy. The Oldest Dragon then appeared at the ruins of the Dragon Dojo and taught the brothers how to transform into the "Double Dragons". The Dragon Sword then split into two, giving Jimmy his own sword. Jimmy wielded the Dragon Claw daggers with his brother for a short while and was later given new armor by Kami. However, this armor was blue on the outside rather than red, and instead of wielding his Dragon Sword, Jimmy shoots energy beams (or perhaps flames) from a dragon-looking blaster on his arm.

Jimmy is hotheaded and often speaks more like a street-smart brawler than an enlightened warrior. For instance, instead of "calling upon the Double Dragon" birthmark to guide him somewhere, he will instead order the "scaly one" to "lead us to the butt we wish to kick". Because of his 'Shadow' training, he is somewhat knowledgeable about the Shadow Master's organization and utilizes a more aggressive fighting style than Billy. At times, he clashes with other personalities, such as Marian or the hacker Megabyte; however, he eventually calms down and befriends those who are on the same side.

This section is empty.
You can help out the Double Dragon Wiki by inserting content here.

A master of "Sousetsuken", he runs a dojo with his younger brother, Billy. Unlike the quick and agile Billy, his expertise is in heavy and powerful offensive moves. Being well aware of Shuko's powers, Jimmy attempts to stop Billy from attacking the evil organizations, and he unwillingly heads for Bloody Town.

Jimmy Lee - The older of the Lee brothers, Jimmy is high-spirited and possesses strength beyond compare. He co-founded Sōsetsuken with his younger brother Billy, and was the instructor at their dojo prior to the war. Rumored to surpass even Billy in martial arts skill, Jimmy likes spending his time studying Eastern philosophy.

Other appearances and cameos

A manga about a group of gaming enthusiasts trying to stop an evil organization in their attempt to conquer the world. The Lee brothers, Billy and Jimmy Lee, from Double Dragon fame, are featured as part of the storyline.

Billy and Jimmy are referenced in the Technōs' Kunio-kun franchise by a pair of recurring characters known as the "Dragon Twins", Ryūichi and Ryūji Hattori, with Ryūji being inspired on Jimmy. The iconic "Double Dragon" theme even plays whenever they are fought in most games in the franchise.

In Downtown Nekketsu Kōshinkyoku: Soreyuke Daiundōkai, Ryūji can perform the Hyper Uppercut from Double Dragon II: The Revenge. This likely led to Jimmy's fighting style in Super Double Dragon being centered on punches.

A character named Jimmy appears as a member of Team Oklahoma in Bikkuri Nekketsu Shin Kiroku! Harukanaru Kin Medal. Originally, it was unclear if this character was a younger Jimmy Lee, but the release of River City Super Sports Challenge ~All Stars Special~ establishes that they are the same character. The character is a palette swap of Ryūichi with brunette colored hair and lower stats, but has the same moves as Ryūichi. The character re-appears in Super Dodgeball Brawlers, River City Super Sports Challenge, River City Melee: Battle Royal Special and River City Melee Mach!!

Downtown Nekketsu Baseball Monogatari: Yakyū de Shōbu da! Kunio-kun was the first game in the Kunio-kun franchise to depict the Dragon Twins with actual faces, instead of the faces that Billy and Jimmy used in the NES version of Double Dragon, though artwork of the series does show their faces. In this game, Ryūji is blond, like Jimmy in most games.

After the release of Double Dragon IV, Ryūji is now based on Billy Lee, with Ryūichi being based on Jimmy Lee, thus the elder Hattori is now inspired on the elder Lee brother. No changes were made to the Dragon Twins' moves or hair color, Double Dragon IV simply switched Jimmy's specialization from punches to kicks.

In River City: Rival Showdown, Ryūichi's (named Randy in the Western versions of the game, just like in other localized games in the franchise) strongest special move is the "Red Dragon Incarnation". He increases his speed and power to levels that only Jimmy Lee is able to attain.

The NES port of the game features Billy and Jimmy as playable characters.

Jimmy, originally nicknamed "Spike", as seen in the US Double Dragon poster.

Jimmy's artwork used in most manuals for Double Dragon. 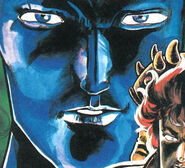 Jimmy's artwork from the Master System manual for Double Dragon. 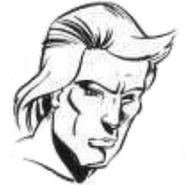 Jimmy's portrait from the ZX Spectrum manual for Double Dragon.

Jimmy's artwork from the Return of Double Dragon manual. 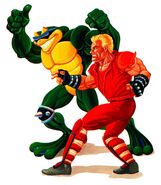 Jimmy Lee and Rash's artwork from an EGM advert for Battletoads/Double Dragon.

Jimmy as the Shadow Boss in the Double Dragon animated series.

Jimmy as himself in the Double Dragon animated series.

Mark Dacascos in his interpretation of Jimmy Lee in Double Dragon.
(1994)

An old photograph of Billy, Marian and Jimmy.

Marian being rescued by Jimmy.