Jeff (ジェフ, Jefu?) is a recurrent enemy character in the Double Dragon series. He is a palette swap of the Lee brothers (usually bearing a green color scheme and some sprite modifications), and likewise, he can employ their same fighting techniques.

He was introduced as the second boss of the arcade version of the original Double Dragon and since then he has made a few reappearances in some of the rest of the games that conform the franchise. Noteworthy is that he was removed from some console versions of the first two games and replaced with other original enemies.

His main comeback took place in Super Double Dragon. In Wander of the Dragons (a remake of the NES/PC Engine version of Double Dragon II), he was given a backstory and a more relevant role in the plot, setting him as a former-friend-turned-rival of the Lee brothers.

Jeff appears in the arcade version of Double Dragon as the end boss of Mission 2. Prior to this, he's first seen in the opening sequence among other members of the Black Warriors when Marian is knocked unconscious and carried away.

Jeff is a head-swap of the Lee brothers who employs most of the same techniques as the player, lacking only the ability to use weapons. Despite this, he's still tougher than the regular grunts and can escape from hair grabs when he still has enough health left, making him a very difficult opponent to contend with when engaged among groups of enemies or even by himself. In addition to the initial boss version, grunt versions of Jeff also appear during the latter half of Mission 3 guarding the entrance to the gang's hideout, and at the end of Mission 4 to assist Willy during the final battle. These grunt versions of Jeff are colored differently from the boss version of the character.

The name "Jeff" was first used for the character in the Master System version published by Sega, which was released a few months after the NES version. However, due to a localization mishap, Jeff and Willy had their names swapped in the English version of the manual and many gaming publications incorrectly identified him as "Willy" as a result. Jeff's design in the Master System version is a bit different form his arcade counterpart, having a pompadour hairstyle similar to Billy and Jimmy's (instead of his characteristic widow's peak), but with different eyebrows. In contrast to the green outfit he wears by default in the arcade version, Jeff wears a gray outfit and has a red shirt.

In the NES version, Jeff and Jick (the other head-swapped enemy in the arcade version) were cut from the enemy roster, making them the only enemy characters who were not officially named by Technōs. Jeff in particular was replaced by a new enemy character named Chin Taimei. Since licensed conversions of the first Double Dragon (namely the home computer versions) used the backstory and character names from the NES version, their manuals listed Chin instead of Jeff as an enemy character, regardless of who was actually featured in the game.

In the Genesis port of Double Dragon, Jeff loses his unique face and appears simply as a recolored Lee brother. However, he's easier to defeat in this version since he cannot escape from the player's hair grab. In the game's manual, his artwork from the Master System manual is used for Roper. Jeff himself appears to be mislabeled "Willy" and given Roper's artwork in the manual.

Jeff is one of the few returning enemies in the arcade version of Double Dragon II who retains his original design, the other being Willy himself. He appears less sporadically in this game, only appearing three times in Mission 3, during the latter half of the stage in a red outfit, and once in Mission 4, during the final brawl. His fighting style is almost unchanged from the first game, with the only change being the fact that he throws grenades in Mission 3. He was cut from the Mega Drive port of the game and only appears in some of the home computer versions as a recolored Lee brother.

Likewise, Jeff was also cut from the NES version of Double Dragon II and a new enemy named Right Arm is often considered to be Jeff's replacement in that game.

Super Double Dragon is notably the only time Jeff has appeared in the console versions of the game produced by Technōs. In this game, he's a complete palette-swap of Billy Lee with a bronze skin tone and a green outfit. He's a recurring sub-boss throughout the game, appearing at least once per stage until Mission 5, his final appearance in the game. As a palette-swap of Billy, he has a similar repertoire of moves and can perform the hurricane kick at any time. Occasionally, he wields a throwing knife, a konbo stick or a nunchaku. He cannot be arm-grabbed like the other minor enemies, but the hair grab does work on him. There's no Jimmy based variant of Jeff in the game.

Jeff is given a much more prominent role in Wander of the Dragons, now being some sort of a former-friend-turned-rival to the Lee brothers and fashioning an all-new, more rebellious look, now prominently wearing black garments instead of his usual green ones, which makes him resemble Right Arm instead, an enemy introduced in the NES version of Double Dragon II and who is considered to replace Jeff in that version of the game.

He's fought as a boss in one of the later missions, in front of an old tree bearing a heart carving made long ago where apparently Billy and Marian promised love to each other (with Jimmy's name scrapped on the side).

Jeff has all the moves of the Lee brothers and can perform them in very lengthy combos by chaining them all together in a quick barrage of attacks that are capable of beating down a full-health character in a single move.

He is also one of the four available characters in versus mode (the others being Billy, Jimmy and Marian). 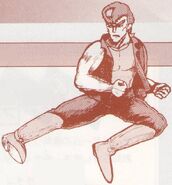 Jeff's artwork from the Master System manual of Double Dragon.

Jeff's portrait from the Return of Double Dragon manual.