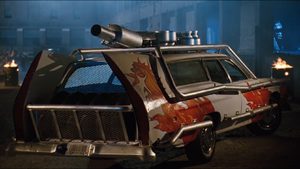 The Dragon Wagon is the car driven by the Lee brothers in the Double Dragon film.

The Dragon Wagon is a 1972 Ford Esquire modified with giant exhaust pipes and a custom fuel engine that runs by burning garbage. Throughout the course of the movie, the Wagon is abandoned by the Lee brothers after it suffers an engine failure, only to be recovered and restored by the Power Corps. The restored Dragon Wagon has a new paint job with dragon decals on each side. The movie ends with Abobo driving off the Dragon Wagon with the Lee brothers and Marian as passengers.

The Dragon Wagon makes a cameo in the Double Dragon fighting game for the Neo Geo, where Billy (when fought as a CPU-controlled opponent) makes his entrance by standing a top of the vehicle before it crashes into the side of a building. The car can be destroyed during battle by throwing the opponent onto it. The design of the Dragon Wagon in the game differs from its movie counterpart as it is completely gray.