The game is the export version of the 1990 Japanese Game Boy game Nekketsu Kōha Kunio-kun: Bangai Rantō Hen (熱血硬派くにおくん 番外乱闘編?, lit. "Hot Blooded Tough Guy Kunio: The Further Brawls), which was part of Technōs Japan's Kunio-kun series. The graphics, music and storyline are different depending on the version of the English version of the game.

Koji Ogata revealed that the grittier build used for the US version actually came first.[1]

The player takes control of martial artist Billy Lee, who is being hunted down by a martial arts organization called the "Scorpions" for murdering Wright, one of its members. The objective of the game is to fight off the members of the Scorpions and reveal the true culprit, a rival martial artist named Anderson to Gordon, the Scorpion's well intentioned leader. A second player can now join in anytime via the use of a Game Link Cable, taking control of Billy's brother, Jimmy.

The combat system is simpler compared to previous Double Dragon games, including the first Game Boy game. The player can perform a series of punches or a kick on most enemies, followed by straight punch or a high kick that knocks the enemy to the floor. Pressing the A and B buttons simultaneously will cause the player to kneel. While kneeling, pressing either button will cause the player to perform an aerial uppercut. Instead of the hair grab from previous games, the player will do a collar grab (similar to Renegade), in which the player can repeatedly punch their opponent in the face or push them to the ground. While standing near a fallen enemy, a jumping knee drop can be performed. Despite the presence of armed enemies, the player cannot disarm them and pick up their weapons like in other games in the series.

The game is composed of three missions, spread across ten stages. The first two missions each consist of four stages that follow a basic structure: the player fights their way through a street until reaching the boss. This is followed by a subway platform, a fight inside a subway car, and the destination platform, where the player confronts another boss. The final mission, composed of only two stages, starts at the streets again, but this time the player must fight their way to the entrance of the "Scorpions" headquarters. Once inside the building, the player will have to fight their way through a series of floors, including an area where all the previous bosses will appear, until reaching the top floor where Anderson awaits.

The game has three difficulty settings, but the "Easy" setting only allows the first mission to be played.

Note: The following boss names are unofficial, except for Anderson.

The Japanese version, Nekketsu Kōha Kunio-kun: Bangai Rantō Hen, was released on December 7, 1990. The Japanese version features completely different graphics (drawn in a style similar to Downtown Nekketsu Monogatari, the Japanese version of River City Ransom), music, plot and characters (with Kunio and Riki being replaced by Billy and Jimmy Lee in the export versions). While the play mechanics, level designs and overall structure of the game are relatively unchanged, the Stage 8 boss (originally a sumo wrestler) was given different attack patterns to better suit his new design as a ninja.

Before Acclaim bought the publishing rights to the game and retooled it as Double Dragon II, Technōs Japan and American Technos Inc. had plans to release it as a sequel to the original Renegade titled "The Renegades". This earlier version had a similar plot to the released game, in which the main protagonist (named McClain in this version) is framed for the murder of a man named Wright. The second player is not referred to by name in the flyer and is only referenced as a friend of McClain.

In the screenshots of the prototype, the character designs of the enemies look identical, but the protagonists wear t-shirts and have mullet hairstyles. Given the already present resemblance between the protagonists and the Double Dragons, it was likely easy to transform them into the Lee brothers. 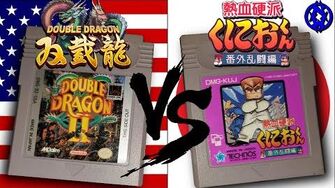