For the arcade version, see Double Dragon 3: The Rosetta Stone.

1 or 2 players (simultaneous)
Double Dragon III: The Sacred Stones, released in Japan as Double Dragon III: The Rosetta Stone (ダブルドラゴンⅢ ザ・ロゼッタストーン, Daburu Doragon Ⅲ: Za Rozetta Sutōn?), is a side-scrolling beat-'em-up produced for the Nintendo Entertainment System in 1991. It was the third Double Dragon game for the NES, developed by Technōs Japan Corp. and published in North America and Europe by Acclaim Entertainment. Although loosely based on the similarly titled arcade game Double Dragon 3: The Rosetta Stone, it is not a port, but rather a parallel project that was developed at the same time.

A year after the downfall of the Shadow Warriors, a new enemy threatens Billy and Jimmy Lee, as Marion is kidnapped by a mysterious organization. The only witness to her kidnapping, Brett, dies before he could divulge their leader's true identity. A fortune teller named Hiruko informs the Lee brothers that Marion's kidnappers are searching for the three Sacred Stones of Power that had been scattered around the world and that the only way to rescue her is to procure them before the kidnappers do. After the initial battle in the United States, the Lee brothers embark on a worldwide journey to find the stones, which takes them to China, Japan and Italy, where they face numerous formidable fighters in each country. The final stage is set in Egypt, where the Lee brothers uncover the truth about Marion's disappearance and come face to face with the true leader of the enemy.

Double Dragon III can be played by one or two players simultaneously, with an "A mode" where both players can't harm each other and a "B mode" that allows friendly fire. Like its arcade counterpart, the NES version of Double Dragon III reverts to having punch and kick buttons as the standard control scheme and the ability to dash by pressing the D-pad left or right twice has been added. The rest of the combat system is a bit closer to the previous NES games, retaining the hair grab move that was removed in the arcade version (although the shoulder throw is gone, as well as the flying knee kick and hyper uppercut from the NES version of Double Dragon II: The Revenge). New moves in this version include a running jump kick (which can become a triangle jump kick when performed on a wall) and a midair somersault that allows the player to throw enemies by jumping on them. During 2-player mode, when both players are controlling each Lee brother, they can perform a twin cyclone spin kick and a triangle jump.

The game discards the traditional lives system from the previous NES installments, as well as the item shops from the arcade version. Instead, the player gains the ability to control two new fighters in addition to the Lee brothers as they progress through the game. These extra fighters join the player's party once they've been defeated as enemy bosses. Chin Seimei (陳 清明), a Chinese martial arts master, joins at the end of Mission 2, while Yagyu Ranzou (柳生 乱蔵, Yagyū Ranzō?), the head of a ninja clan, appears at the end of Mission 3. By pressing the Select button at any point, the player can access a character selection screen and switch between any of the available fighters. Each fighter has his own fighting techniques, health points and speed, making them suitable for different situations. When the player loses a fighter, he will automatically change to the next available character until the entire party has been defeated. Normally the game ends when the player's party has been vanquished, but the player is given the option to continue once during the final two stages.

In addition to fighting unarmed (or with a sword in Ranzou's case), each fighter has a backup weapon that they can draw at any time from the character selection screen, but can only be used for a limited time. This feature allows the Lee brothers to use nunchakus, Chin to wield an iron claw and Ranzou to throw shurikens. Weapons can also be obtained by disarming certain enemies, although only the Lee brothers and Chin can armed themselves with enemy weapons (which include a throwing knife, a sai, and a beer bottle). An enemy's weapons can be used as long as the original owner is alive.

The English version altered the plot of the game during the translation process, as the Japanese version (titled Double Dragon III: The Rosetta Stone) features a script that's much closer to the arcade game. Whereas the English version involves another rescue mission to save Marion, there's no mention of her in the Japanese script and the Lee brothers are simply searching for the stones in order to become the world's strongest fighters (the final boss is a resurrected Cleopatra instead of Princess Noiram). Additionally, the death of Brett (whose name was Aldo in the Japanese version) was not connected to the search for the stones, but rather the culprit turns out to be Jim, the boss of the first stage, who is revealed to be the brother of Willy from the original Double Dragon (a subplot that was eliminated in the English version). Additionally, the difficulty is slightly different between the two versions. In the Japanese version, the player starts each stage with more health for their characters and there are fewer enemies to fight. Furthermore, the ending of the Japanese version differs depending on which of the player characters are still alive by the end of the game, whereas the English version always shows the complete ending with all four protagonists no matter what.

While Billy's name is normally spelled correctly throughout most of the game, even in the 1-player version of the opening, the opening of the 2-players mode has his name misspelled as "Bimmy" when both Lee brothers are shown together on the very first screen. While this mistake is often attributed to be a translation error, it should be noted that the English version of the script is not actually a direct translation of the Japanese original, as the story underwent changes during the localization. A promotional flyer for the Famicom version features a more direct translation of the original opening text, which spells the name correctly.

When Double Dragon III was reviewed by James Rolfe in an early episode of his web series, The Angry Video Game Nerd, his eponymous onscreen persona throws a tantrum after reading the misspelled name.

This typo would also serve as the inspiration for the enemy characters Bimmy 'n' Jammy in Double Dragon Neon, deformed clones of the Lee brothers who are described by their introductory tagline as "Mistranslated Mutants". 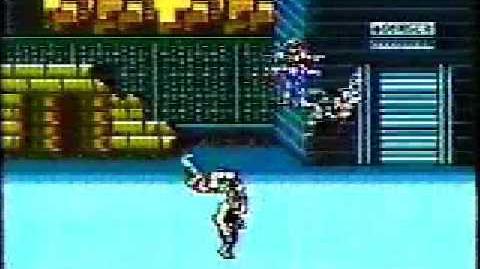