Double Dragon Advance (ダブルドラゴンアドバンス, Daburu Doragon Adobansu?) is a 2003 side-scrolling beat-em-up video game released for the Game Boy Advance. It was published by Atlus and developed by Million Inc., S-NEO and Paon. It is a remake/expansion of the 1987 arcade game Double Dragon and incorporates elements from its sequels and home versions.

Like in the original arcade game, the player takes control of martial arts masters Billy Lee, or his brother Jimmy, as they fight their way against the members of the Shadow Warriors in order to rescue Billy's girlfriend Marian. Double Dragon Advance can be played alone or with another player via a Game Link Cable. A third game mode allows a single player to play the game as both Lee brothers, with one character being controlled by the player while the other stands idle until the player switches character. There is also a Survival Mode in which the player must defeat as many adversaries possible in a single life.

All of the player's techniques from the original arcade game are featured, as well as several new ones based on later arcade and console versions (such as the Hyper Uppercut and the Hyper Knee from the NES version of Double Dragon II: The Revenge), as well as other beat-'em-ups by Technōs such as Renegade and The Combatribes (like the sit-on-punch and the jump stomp respectively). New weapons are also added as well, including nunchakus and double kali sticks.

Four new stages were added as well, all taking place between the original stages from the arcade version. These includes a Chinatown stage, a fight atop a moving truck (both inspired by Super Double Dragon), a cavern stage (similar to the one from the first NES game), and a fortress before the final stage (inspired by the final stage of Double Dragon II: The Revenge and including a final boss named Raymond, who is based on the Mysterious Warrior). Most of the enemy characters from the first two arcade games are featured, along with a few new ones introduced in this version such as the Twin Tigers Hong and Huang, Kikucho, and the Five Emperors. Moves that could not be performed on certain enemies in the original arcade games can now be performed against them in this version such as the hair-pull on Abobo.

The Japanese version of Double Dragon Advance, released four months after the initial North American version, features a few slight changes. The Sound Test on the Option Mode is available by default and does not require a code, and a Gallery is made available on the main menu after the completing the game on the Expert setting. The Special Thanks on the end credits now mentions Bruce Lee, as well as Yoshihisa Kishimoto, the director of the Double Dragon arcade game. The game's difficulty has been re-balanced and a few minor bugs were fixed. The Japanese version's instruction manual includes additional character profiles, as well as a list of combos.

Double Dragon Advance garnered generally positive reviews, with a few of the criticisms aimed at the short length of the game. Alex Navarro of GameSpot gave the game a score of 8.3 and wrote: "while (the game) may prove to be a bit too fleeting for anyone seeking a long-lasting gameplay experience and the additional gameplay modes are a bit too restrictive in the design for what they're supposed to be, the game is still great fun and is definitely worth playing through long after you've beaten it the first time." Justin Leeper of Game Informer, who gave the game an overall score of 9, wrote: "It's still no 30-hour marathon, but Atlus has added a whole lot to an already-excellent beat 'em up." 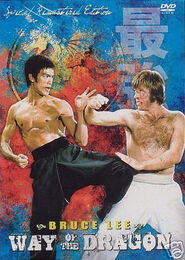 Retrieved from "https://doubledragon.fandom.com/wiki/Double_Dragon_Advance?oldid=16549"
Community content is available under CC-BY-SA unless otherwise noted.