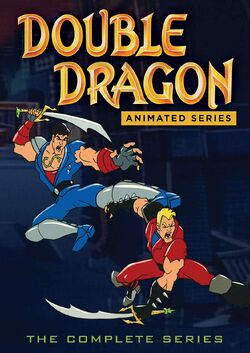 Double Dragon is an American-Canadian-Italian animated series based on the video game series of the same name. It was produced by DIC Animation City, Bohbot Entertainment and Italian studio Reteitalia, S.p.A., in association with Spanish network Telecinco, and ran for 26 half-hour episodes from 1993 to 1994.

The premise of the show had the protagonist brothers separated at birth, with Billy raised by an elderly martial arts master known as the Oldest Dragon, and his brother Jimmy raised by the evil Shadow Master as his second-in-command, the Shadow Boss. As a result, the Lee brothers oppose each other as adults, but Jimmy is betrayed by the Shadow Master and joins his brother as a "Dragon Warrior". During the course of the series, the brothers recruited allies in their war against the Shadow Master (voiced by Jim Byrnes) and his henchmen. The futile search for their father, John Lee, was a subplot throughout the series.

The plot of the pilot episode of the series is loosely based on the NES version of the first Double Dragon game. Like in the game, Jimmy is revealed to be the Shadow Boss in this episode, with his henchmen being Abobo and Wild Willy, who were boss characters in the game as well. By the end of the second episode, Abobo and Willy are sucked into the Shadow Mural, never to be seen again, while Billy and Jimmy join forces to fight against the series' true antagonist, the Shadow Master. All of the characters introduced from the second episode and onward were original creations made for the show. The story and characters of the animated series would be used in the Tradewest-produced Double Dragon V: The Shadow Falls, a Double Dragon fighting game released for home consoles. Also, there was a feature film titled The Shield of Shadow Khan, which was conformed by three of Season 2's episodes: "Shadow Khan", "Shadow Claw" and "Doom Claw".

In the series, Lee brothers are martial arts instructors and police consultants, who assume superheroic identities at moments of escalated violence. They usually transform out of those forms by crossing swords again and saying in unison "we are double dragons!", although several episodes show that heavy injury can deactivate their powers. Injury sustained by one is also taken by the other (although this ability is inconsistently shown); and if one has his powers deactivated by injury, so will the other. The brothers infrequently show an ability to sense when the other is in danger. They are the leaders of a small group of 'Dragon Warriors' endowed with superhuman powers based on the use of a smokeless, green 'dragon fire'. The Lee brothers also had green dragon tattoos on their chests revealed to be birthmarks from birth, which were concealed by their undershirts but visibly seen when they were in a transformed state.

The Dragon Warriors are Billy and Jimmy's subordinates; each has their own distinct costume and powers.

These are Billy and Jimmy's younger students, and supporting characters throughout the story.

Most of the Shadow Warriors are mutants. The Shadow Master says in "Over the Line" that these mutants are created by "high levels of electromagnetic field generated by Metro City's ancient underground power grid". According to the same episode, the EMF gives the Black Flame its power (the source of the Shadow Master's own magic).

Selected episodes were released on VHS.

On August 2019, the complete series was released in a 3 disc DVD set.