Single player, multiplayer
DOUBLE DRAGON & Kunio-kun Retro Brawler Bundle is a compilation of Famicom and NES games developed and published by Arc System Works for the PlayStation 4 and Nintendo Switch. It was announced on February 5, 2020 and released on February 20, 2020.

All of the 11 Famicom games in the Kunio-kun franchise are included in the compilation, localized in English for the first time. 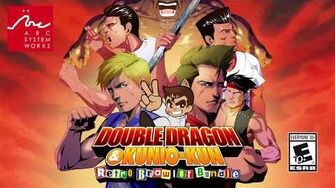