For this character's Double Dragon 3 arcade counterpart, see Chin Taime.
Not to be confused with Chin Seimei.

Chin Taimei (チン・タイメイ?), or Chintai Mei (ちん・たいめい?), shortened to Chintai in localized manuals, is a recurring enemy in the Double Dragon series. He first appeared as the boss of Mission 2 in the NES port of Double Dragon, and afterward as a regular enemy.

He returned with an all-out new design as a sub-boss in Double Dragon II: The Revenge, being much taller, armed with bastons and generally encountered in pairs.

Chin Taimei was a skilled Kung Fu practitioner and master of the Koh-oh Ken style who hailed from China. At some point, he joined the Black Warriors criminal organization merely as a way to fight strong opponents and improve his skills.

Chin's first encounter with a Lee takes place at the top of a construction site during Billy's quest to rescue his kidnapped girlfriend, Marian. Despite Chin's great kung fu skills, he was ultimately defeated by him.[2]

Time later, Chin plotted a rematch against the brothers, this time armed with a pair of bastons and having mastered new techniques, such as employing flying kicks, sweeping round kicks and performing somersaults in combat. However, he was once again defeated by the Double Dragons and this time he presumably died from fatal injuries sustained during the fight.[1]

In the arcade version, he is much taller than his NES incarnation from the first game, has a shorter hairstyle and his outfit has been redesigned into a sleeveless, two piece martial arts gi, wearing a black belt around his waist and wristbands.

He starts appearing very late in the game. His first encounter takes place right outside the gate to the enemy's base at the end of Mission 3, where he acts as the area boss. From then onward, they're usually encountered in pairs –apparently portraying an evil counterpart to the Double Dragons– and act as sort of minibosses, with two more attacking shortly after invading the base. Two Chins in gold uniforms act as Willy's bodyguards, similar to Jeff in the first game.

In the NES version, Chin resembles an amalgamation from his two previous incarnations (NES Double Dragon and arcade Double Dragon II), now having brown and longer hair, wearing a two piece sleeveless martial arts gi, and always armed with a pair of bastons. Like in the arcade version, his attacks now mainly consist in a melee combo with the bastons and flying kicks. They are always encountered in pairs.

In the PC Engine CD version, Chin appears as a shirtless giant man with long hair tied into a ponytail. He is a much tougher boss than his NES counterpart.

One year later, during a trip to China in their search of the fabled Sacred Stones of Power, the Lee brothers were confronted by another skillful martial artist called Chin Seimei, who happened to be none other than Chin Taimei's older brother seeking revenge for his death at their hands; however, he was also defeated. Realizing their superiority, Chin offered to join them in their search of the stones, with the intention of also improving his own fighting skills along the way and hoping to one day fight them again in a honorable match.[3]

Chin Taimei reappears as a common enemy in Double Dragon Advance. He usually appears and fights alongside Chen Yuan Gui and also wields bastons, although same as his previous incarnations he cannot be disarmed.

Chin's artwork used in most manuals for Double Dragon. 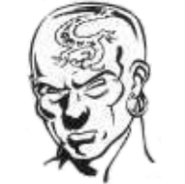 Chintai's portrait from the ZX Spectrum manual for Double Dragon.

Chin's portrait from the Famicom manual for Double Dragon II. 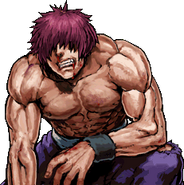 Chin in the "Mode B" versus game in Double Dragon.
(NES)