Daisuke Gōri (Neo Geo)
Burnov (ブルノフ, Burunofu?) is a recurring boss enemy in the Double Dragon series. He is a former wrestler and recurring inmate who has been hired by the Black Warriors. He is a tall and obese thuggish powerhouse who wears a metal mask and has slight magical capabilities.

He debuted in the arcade version of Double Dragon II: The Revenge and has since appeared in all remakes of the first game, generally appearing as the second boss.

Burnov is a masked wrestler who serves as the end boss of Mission 1. His favorite method of punishing his victims is grabbing them by the head with one hand and using the other to viciously punch them in the stomach, finishing with a heavy blow to the face. Unlike other enemies, which simply lie on the floor after being defeated, Burnov will stand up and growl before vanishing into thin air, leaving behind his garments and mask. He reappears in pairs near the end of Mission 3, before reaching the entrance of the enemy's hideout, and again in Mission 4 just before the final hall. The second Burnov who gets defeated in both of these encounters will always revive himself once after his initial defeat, and after being defeated a second time he'll vanish for good.

Like the other enemies in the game, Burnov's palette changes for each stage. The initial Burnov in Mission 1 has red hair and blue pants, while the pair that appear in Mission 3 have blue hair and wear red pants, sharing the same palette as Linda in those stages. The twin Burnovs in Mission 4 wear white pants and have purple skin.

Burnov only appears twice in the NES version, first as the boss at the end of Mission 1 and later on in the first room with the disappearing bridge in Mission 7. He always revives himself once after losing his first battle, but can be immediately defeated if he's thrown off a building or into a spiked pit.

Like most other recurring enemies, Burnov has three palettes: blue pants/red hair, green pants/brown hair, and black pants/blond hair. Each palette is more powerful than the last and in harder difficulties Burnov's later palettes appear earlier; for example, the end boss of Mission 1 is a blue pants Burnov on Easy, but is a green pants Burnov on Normal.

Interestingly enough, Burnov appears and even plays a minor role in this remake of Double Dragon, even though he mainly belongs to most versions of Double Dragon II, its remakes and sequels. He acts as the boss of Mission 2; in fact, he reprises this role as the second boss in all three remakes of the first game (the other two being the Zeebo and mobile versions), when the rights to the Double Dragon franchise were owned by Million.

In this game, he is faster than his previous incarnations and uses a forward charging attack. After being defeated, he advises the Lee brothers to investigate a nearby martial arts gym owned by Willy in Chinatown. He reappears as a semi-regular enemy in subsequent missions, sporting all sorts of bizarre color schemes.

His profile in the Japanese manual states that Burnov was a wrestler before the apocalypse and that he was barred from betting matches due to his skill. His profile states his idols are Bruiser Brody and André the Giant, while his hobby is dating men.

In this remake of the first game, Burnov is also given a somewhat prominent role, as he's actually the one who knocks out and carries Marian away when she's kidnapped (instead of Williams like in the original versions). He appears as the boss of Mission 2, and twin versions with pink skin, red armor and green pants appear in the final chamber, prior to the battle with Willy.

Burnov's special moves consist of his classic grapple, the shoulder charge from Advance, and a new move consisting of him charging, then unleashing a barrage of open-handed strikes. He is a playable character in the game's Extra mode.

Burnov is the boss of Mission 2. He is an inmate who is best buddies with Abobo and plays drums in a band with him on the axe and Cindy on vocals.[2] He is a master of prison breaks.

After being subdued by the brothers, he tells them that Willy's gang has made an old school building their home base and that their leader should know where to find him; and so, without wasting any more time, the brothers head on their way there.

Rather than the obese thug generally associated with his persona from previous games, in Wander of the Dragons Burnov appears as a tall strongman clad in power armor. While still having a large stomach, surgery scars on his sides imply that something could have been artificially inserted into his body (his stomach also has an abnormal patch of fur growing on its front, probably as a result of such procedure).

He makes his introduction by knocking down a wall of drums containing hazardous materials. His armor features a big core on its chest area which presumably powers the device. After the battle, the player can pick up this object and use it as a powerful explosive that can be thrown at enemies in a future encounter.

Once Burnov has been defeated, he'll remain on the ground, unable to stand back up and begging the brothers for mercy; as the player finishes him off, a necklace will fly off from his possession, which Billy then remembers in a flashback to have been a gift he gave to Marian some time ago, immediately realizing that she was wearing it at the moment of her murder and which the perpetrators took from her body, further fueling his thirst for revenge.

While on a trip to San Francisco, Burnov and his crew attack the Lee brothers. These beat up the attackers, including Burnov, who tells them he was hired by Jake of the "Renegades".

Burnov acts as the bouncer to Noize's concert. He will only allow Kyōko and Misako through if they can get him VIP passes.

Burnov's portrait from the Famicom manual for Double Dragon II. 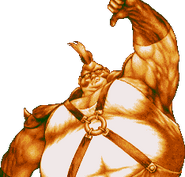 Model sheets of Dulton and Burnov by Koji Ogata. 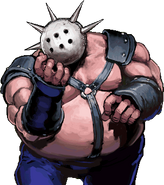 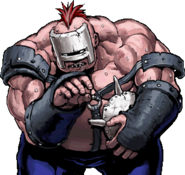 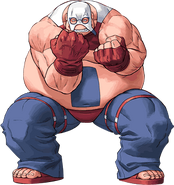 Kang Jae-Mo from the homage fighting game Rage of the Dragons is inspired by Burnov.