Brown or blond (black in some media)

Billy Lee (ビリー・リー, Birī Rī?), originally known in the West by the localized nickname of "Hammer",[1] is one of the two main protagonists of Technōs' Double Dragon series of beat 'em up games. He is the twin brother, training partner and in some occasions even rival of Jimmy Lee. He is a master of Sou-Setsu-Ken, a legendary Chinese martial art which he mastered at a young age.

Billy is also the boyfriend of Marian, who is often captured by rival gangs (mainly the Black Warriors) in order to lure him and his brother to reveal the secrets of their fighting technique.

Heir to the Chinese martial art, Sou-Setsu-Ken. Billy Lee began learning Chinese Kenpou from his father at 12 years of age and mastered several martial arts forms during the following eight years until he turned 20, when he inherited the title of "Sou-Setsu-Ken Master" and established the Sou-Setsu-Ken Dojo with his twin brother to teach citizens how to defend themselves from the Black Warriors.

At the young age of 20, he and his twin twin brother became legendary masters of a Chinese style of Kenpou called Sou-Setsu-Ken. In the first game, Billy saved his girlfriend Marian from the clutches of the Black Warriors, but now, Marian was killed by this gang and Billy is looking to avenge her death. Billy is Player 1 and wears dark blue clothing in the original arcade version and direct ports of the game.

After the Black Warriors were gone, Billy and Jimmy joined a training hall called the "Scorpions". In only a few months both brothers became teachers. A fellow member named Anderson became jealous of them and framed Billy for the murder of Wright, another instructor. The Scorpions' leader, Gordon, gave out orders to hunt down Billy. Billy eventually managed to defeat Anderson and clear his name.

Heir of Sou-Setsu-Ken. He started to learn Chinese Kenpou from his father since he was 12 years old and learned several fighting styles for eight years until he turned 20, when he became the heir to Sou-Setsu-Ken. He recently returned from a training mission and is now facing his biggest challenge yet: to find three Rosetta Stones.

One half of the Double Dragons. Billy began to learn Chinese martial arts and several other kinds of fighting styles at the age of 12 and became heir to the Southern-style of Sou-Setsu-Ken at age 20.

The twin brother of Jimmy Lee. He began his martial arts training at age 12 and became a Kung Fu Sou-Setsu-Ken master at age 20.

Billy is separated from his twin brother at birth. His uncle, the Shadow Master, kidnaps Jimmy. Billy is rescued by their father, John, and is placed in the care of John's master, the Oldest Dragon. Eighteen years later, Billy reunites with his brother and makes him see just how evil the Shadow Master really is. Billy is the even-tempered, responsible brother, and often dispenses wisdom to the students of the Dragon Dojo. Jimmy is the bad-tempered, trendy brother, and often dispenses serious code to the students of the dojo.

This section is empty.
You can help out the Double Dragon Wiki by inserting content here.

A kind hearted, justice-loving young man who grew up learning Chinese and Japanese martial arts from a very young age. With his older brother Jimmy, he created the fighting style "Sou-Setsu-Ken". Sou-Setsu-Ken is a combination of Shaolin Kenpo, T'ai Chi, karate, judo, aikido, etc. Billy runs a martial arts dojo with his brother where he works on developing and mastering the best technique, but a letter from their old instructor brought them back to the city in which they grew up. Upon hearing of Koga Shuko from Marian, Billy makes the decision to destroy his evil organization.

The younger of the Lee brothers, Billy is a martial artist with a strong heart and body. He has learned numerous styles of martial arts since he was a child, and with his brother Jimmy, he founded Sōsetsuken at the age of 20. He is usually calm and quiet; only his brother Jimmy is capable of stopping him.

Other appearances and cameos

A manga about a group of gaming enthusiasts trying to stop an evil organization in their attempt to conquer the world. The Lee brothers, Billy and Jimmy Lee, from Double Dragon fame, are featured as part of the storyline.

Billy and Jimmy are referenced in Technōs' Kunio-kun series by a pair of recurring characters known as the "Dragon Twins", Ryūichi and Ryūji Hattori, with Ryūichi playing the part of Billy. The iconic "Double Dragon" theme even plays whenever they appear.

After the release of Double Dragon IV, Ryūichi is now based on Jimmy Lee instead.

Billy makes a cameo as a member of the audience.

The NES port of the game features Billy and Jimmy as playable characters. 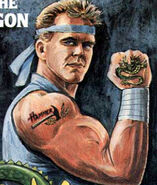 Billy, originally nicknamed "Hammer", as seen in the US Double Dragon poster .

Billy's artwork used in most manuals for Double Dragon. 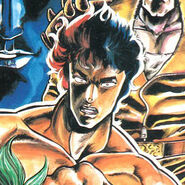 Billy from the Famicom cover artwork for Double Dragon.

Billy's artwork from the Master System manual for Double Dragon. 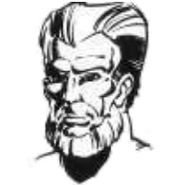 Billy's portrait from the ZX Spectrum manual for Double Dragon. 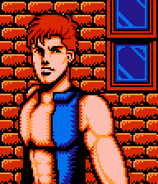 Billy's portrait from the Famicom manual for Double Dragon III.

Billy's artwork from the Return of Double Dragon manual. 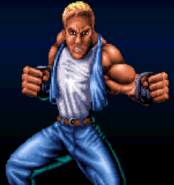 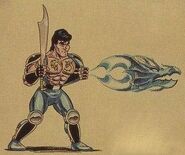 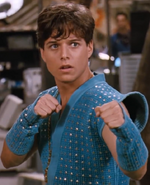 Scott Wolf in his interpretation of Billy Lee in Double Dragon.
(1994)

Model sheets of Billy and Rebecca by Koji Ogata.

An old photograph of Billy, Marian and Jimmy.

Marian being rescued by Billy. 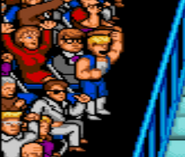