Daisuke Gōri (Neo Geo)
Abobo (アボボ, Abobo?) is a recurring enemy character in the Double Dragon series, usually serving either as a miniboss, the end boss of an area, or in few occasions even as a minor antagonist. He is normally depicted as a shirtless, tall and bald strongman.

Abobo is a recurring sub-boss in the arcade version of Double Dragon, first appearing midway through Mission 1, making a rather dramatic entrance by breaking through a wall by punching it with his bare fists. This strongman is tougher and more menacing than the other grunts in the game. Due to his large stature, his punches and kicks have a better reach than the other minor enemies. His signature technique is the "Atomic Throw", in which he picks up and tosses the player to his back. He's the only male enemy in the game who cannot be grabbed by the player. After the initial encounter, Abobo appears again a few times throughout Mission 3 (including twin versions before arriving at the enemy hideout's gate) and one last time as part of the final set of enemies prior to the final battle with Willy in Mission 4.

Like Roper, Abobo has the ability to pick up and toss large objects such as oil drums, but he only has the opportunity to use this ability in Mission 3.

The NES version of Double Dragon only features the bald Abobo, where he serves as the end boss of Mission 1. The player fights him inside a warehouse with a conveyor belt at the bottom. This allows the player to easily defeat him by making him fall into the pit at its end; however, the player also risks that Abobo manages to knock them out first and be the player instead the one who falls into the chasm.

Abobo has a palette similar to the arcade-exclusive enemy character Jick (that is, dark skin and blue pants). His moves consists of standard punches and kicks, as well as a hand slap to the face. He later appears a few more times in Missions 3 and 4. One variant has white skin and wears green pants, while another variant has green skin and white pants (the same color scheme as the Mission 3 boss in the arcade version, later renamed as "Mibobo"). All the Abobos after the initial one fight in pairs, although only the white ones will fight the player together at the same time, while the black and green Abobos will take turns.

Abobo is also a playable fighter in the "Mode B" versus game. Unlike the other fighters, his sprite is almost unchanged from the main game (reused probably due to hardware limitations), aside from the addition of a running animation and other new moves. Moves exclusive to Mode B include a two handed slap (similar to the one used by Jick in the arcade game), a running punch, a knee kick and a shoulder tackle performed by pressing A and B simultaneously. The Abobo controlled by Player 1 has light skin and blue pants, while the one controlled by Player 2 has dark skin and purple pants.

In Double Dragon II: The Revenge, Abobo is replaced by a similar enemy named Bolo, who resembles the bald Abobo but with long mop hair. In the Mega Drive port of the arcade game, this character is actually identified as Abobo in the manual, but it is unknown whether this was the intention of the arcade game's developers or merely a misprint. Bolo's head-swapped counterpart is named O'Hara in the same version of the game.

Abobo serves as the end boss of the very first stage, where he guards the rear entrance to the Dark Queen's Ratship. During the game's introduction and before the level starts, he can be seen threatening the heroes with trash talk. He has a speech mannerism similar to the Marvel superhero Hulk, where he refers to himself in the third person in a crude manner (e.g.: "Abobo not like intruders").

Once the player reaches the rear gate of the Colossus, Abobo makes his dramatic entrance by destroying it with his bare fists. He advances menacingly toward the player, and once near enough, he starts pummeling them with a quick barrage of punches that is almost impossible to break out from. However, being the first boss of the game, he is relatively easy and all it takes are dashing attacks to both damage and stun him at the same time, leaving him open for another quick dashing attack. Repeat the attack until he's no longer able to get up and punch/kick him off the ship into the emptiness of space.

Abobo is one of the few Double Dragon villains who is relatively close to his design in the original Technōs games (the other being Linda).

Abobo is a playable fighter in this one-on-one fighting game. His background and occupation as a henchmen of Koga Shuko is very similar to his live-action incarnation from the Double Dragon film. Despite working for Shuko, he seems to be on friendly terms with the Lee brothers and Marian. He has three special moves (the Hammer Punch, the Hyper Bomb and the Giant Swing), as well as two super moves (the Grand Smash and the Pressure Bomb). When performing one of his super moves, Abobo briefly morphs into his mutated form from the film.

Since Double Dragon Advance is a remake of the first game, Abobo's role in the game is not much different, although his fighting style is a bit more refined, with the double-handed slap his variant Jick had in the original game being replaced with a Hammer Punch, similar to one of he used in the Neo Geo fighting game, called the "Abobo Hammer".

In addition to the bald and mohawked variants (Jick), this version also introduced a third variant of the character that has an afro hairstyle (Afrobo). Only the mohawked head-swap of Abobo has a different face, possessing larger eyes. In addition to the standard black and white skin tones, Double Dragon Advance introduces an entire army of Abobos with all sorts of weird skin colors, such as blue, silver, gold and charcoal black. The green version of Abobo/Jick appears as the boss of Mission 5, where he's given the name of "Mibobo" (a combination of the Japanese word midori, for "green", and Abobo's name).

Abobo appears in the Zeebo version as the first boss of Mission 1 and is no longer a common enemy. He is greatly inspired by his Double Dragon Advance counterpart. Abobo has lightly tanned skin and large muscles, however, he isn't as tall as his Advance inspiration. He has been given a new special attack where his body first briefly flashes in black and then he smashes his hand on the ground, liberating harmful waves of electricity that travel in four directions along the floor.

Abobo is accompanied by a red-skinned variant with a mohawk (similar to Jick), the returning afro variant (Afrobo) and green-skinned palette swaps of himself (Mibobo).

Abobo appears much like he does in previous games, being a tall and bald musclehead, although his fighting pose in this game could make one wonder if he's really trying to look menacing at all. Besides standard punches and kicks, Abobo has the following special moves: Abobo Hammer (from Advance), a powerful block, the two-handed clap and the Screw Upper.

After the game is beaten, Abobo can be unlocked and played as in extra mode. His palette can be changed to turn him into Mibobo. Abobo's Screw Upper can hit multiple foes lying on the ground, making him one of the more powerful playable characters.

Conversely to his Neo Geo counterpart, where he's stated to have a rivalry with Burnov, in this game he's best buddies with him and plays the axe in a band with Burnov on the drums and Cindy on vocals.[1]

A post by the developers says Abobo recently shaved his mohawk.[citation needed]

Abobo, along with Williams and Linda, are the only classic villains to appear in Double Dragon Neon. All three bad guys appear in the very first stage of the game, where he acts as the area boss and later appears as a common enemy on subsequent levels. His techniques include a headbutt, an uppercut, a kick, a powerful throw, and a two-directional punch that he uses as a counterattack. He's resistant to stuns and knockdowns, and cannot be grabbed.

Abobo returns as a member of the Renegades. He resembles his NES counterpart but now has boots. He also now has running and jumping attacks.

In the animated series, Abobo (voiced by Blu Mankuma) is one of two main henchmen of the Shadow Boss, along with Wild Willy, who appear in the show's pilot episode "The Shadow Falls". He is a large blue thug with monstrous strength who works for the Shadow Boss. Unlike other incarnations of the character, here he's shown to be fairly intelligent, to the point of knowing to fear both the Shadow Boss and the Shadow Master. He's certainly smarter than Willy and derides him for being so reckless. In the show's second episode, "The Legend Continues", he and Willy are absorbed into the Shadow Master's Shadow Mural as punishment for their constant failures and are only seen for the remainder of the series as images inside it.

Bo Abobo (played by Nils Allen Stewart and Henry Kingi) is the leader of the "Mohawks", one of the many gangs under the employ of Koga Shuko. He's charged with recovering the missing half of the "Double Dragon" medallion in possession of the Lee brothers, but after failing to accomplish this task, he's punished by Shuko and is mutated into a hulking monster (played in costume by Henry Kingi). He later reforms and helps the Lee brothers fight Shuko, exposing his weakness to light.

In this installment of the Kunio-kun franchise, Abobo appears both as the Mayor of River City, as well as the school principal of River City High. He appears randomly in some areas of the game to attack the player. The player can also fight him in his office on the third floor of the school if they dare to attack any of the teachers.

A massive brute who has been causing trouble for years, known to kidnap people for money; although since kidnapping doesn't pay as much as it used to, he also does freelance work, such as acting as a security guard. He also appears in an educational film about "puberty" shown in River City High. He acts as the game's fourth boss, fought in Downtown. Defeating him increases damage of sharp weapons by 10% and allows access to Ocean Heights.

Abobo's artwork used in most manuals for Double Dragon.

Abobo's artwork from the Master System manual for Double Dragon. 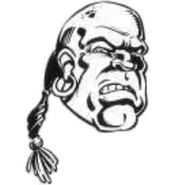 Abobo's portrait from the ZX Spectrum manual for Double Dragon. 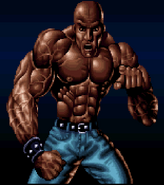 Bo Abobo before his mutation in the Double Dragon live-action film. 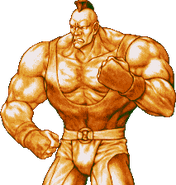 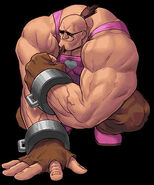 Abubo Rao from the homage fighting game Rage of the Dragons is inspired by Abobo. 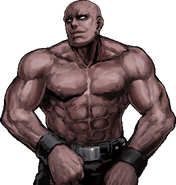 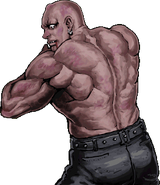 Abobo in the "Mode B" versus game in Double Dragon.
(NES)